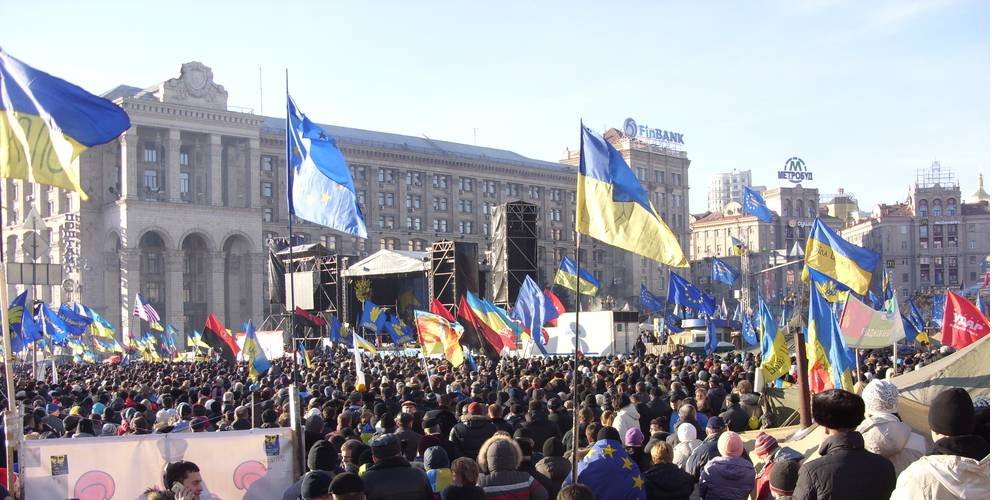 How we began defending ourselves against Russia and Gazprom

Key events in the counterattack were the Revolution of Dignity, Arseniy Yatseniuk’s invitation to Andriy Kobolyev to become head of Naftogaz, the launch of a new Russian gas war, and the invitation I received from Kobolyev to lead an effective defence against Gazprom's claims.

In the autumn of 2013, we went out onto the streets to get their country back. This move was triggered by president Viktor Yanukovych's backtracking on plans to secure EU membership for Ukraine.

At first, protestors were few in number and mostly students. Everything changed after they had been beaten up by the riot police loyal to Yanukovich. The regime was attacking our own children – just because they wanted to live in a normal country.

So the protest swelled. Everyone realised we were being deprived of our dignity, our future, and most importantly, our freedom. But we – Ukrainians – are a free-spirited people, and this spirit manifested itself in a spectacular way.

Our longing was to live in a European democracy, and we absolutely rejected despotism. This ran counter to the Russian policy towards Ukraine. But we were getting our country back, and Russian president Vladimir Putin was not about to take that lying down.

The leaders of the Yanukovych regime fled the country, and Yatseniuk, a representative from the parliamentary opposition, became an interim Prime Minister. Russia began its war against Ukraine. It annexed Crimea and created puppet separatist republics on the territory of the Donetsk and Luhansk regions.

After a delay of almost a month which was unfortunately never explained, at least in public, the new government finally replaced the CEO of Naftogaz.

For me, the new era in the company's history began when Kobolyev was invited to take over at the end of March 2014.

This invitation came from Yatseniuk. It should be noted that the government exercised effective control of Naftogaz at that time through the appointment of CEOs and heads of subsidiaries, through budgeting and so forth. Naftogaz's CEO had limited powers. It was only later, after corporate governance reforms had been introduced, that the position changed somewhat.

Almost concurrently with these developments, Gazprom revoked the gas "rebates" which had only recently been agreed between Putin and Yanukovych. The price went up from USD 269 to USD 485 per thousand cubic metres.

In April 2014, Russia renounced the "Kharkiv treaty" of 2010, which provided rebates on Russian gas purchases in exchange for an extension of the lease for the Russian Black Sea Fleet base in Sevastopol.

It also demanded repayment of USD 11 billion – the total amount of the rebates since the treaty was put in place. At mid-April, moreover, Naftogaz owed Gazprom a total of USD 3.5 billion for gas which had been delivered but not paid for and for Gazprom’s prepayments on future gas transit.

The Russian company also had another card up its sleeve – the right to demand payments under the take-or-pay provision in the gas supply contract. These claims came to USD 7.1 billion for 2012 (invoiced on 15 January  2013) and USD 11.4 billion for 2013 (invoiced on 23 April 2014). Gazprom reminded Naftogaz of these demands in a letter of 30 April 2014.

The price of natural gas went up from $269 to $485 per thousand cubic meters.

Our international partners reacted cautiously. Even those in the West who supported us did not believe Naftogaz could possibly prevail in a dispute with Gazprom, and merely offered to help with negotiations. In this climate, the Gazprom’s European partners actively lobbied on behalf of Russian interests, arguing "this is just business".

No money was available to pay Gazprom. For quite some time, Naftogaz had been known as the “black hole" in Ukraine's government budget. Its deficit in 2014 amounted to UAH 109 billion (USD 9.1 billion) – well above the government budget deficit of UAH 72 billion (USD 6.05 billion) at the time. This was clearly the most acute problem for the company, and one of the country’s most difficult positions.

My return to Naftogaz

The invitation to return to Naftogaz came from Andriy Kobolyev.

I had previously researched the economics of Naftogaz’s relationship with Gazprom in great detail, particularly when compared with European standards. Back then, I had spoken out publicly against the policy adopted by Naftogaz and the government towards Gazprom, and had argued for alternative approaches.

My view of the position when I returned also diverged from received wisdom. I saw no reason to rely on Gazprom to honour any rebates or even to continue supplying gas at all, unless Ukraine capitulated to Putin outright.

So I suggested exploring other options – above all, securing alternative gas supply routes from Europe. I also disagreed over which claims to pursue in arbitration proceedings against Gazprom concerning the gas supply contract. Besides, I saw the necessity to start arbitration over the gas transit contract as well.

Initially, I worked on developing strategies, advised Kobolyev and took part in the most crucial negotiations. Then, since Kobolyev was unable to find an alternative candidate who could implement my advice, he offered the role to me.

Thanks to my business education and experience of working in the West, I could apply my international management expertise to solving the problems posed by the contracts with Gazprom, securing alternative gas supply routes from the European market, advancing related reforms of the gas market, and improving corporate governance.

I felt it was my civic duty to come work at Naftogaz. We are currently taking a lot of criticism for the levels of pay and bonuses in the company, but they were not set by me and were anyway raised at a much later stage.

For the first 18 months at Naftogaz, whatever pay or bonuses I was getting never reached me or my bank account – it went on office expenses. I even covered some of the expenses out of my own savings. So I was not after money when I came to work at Naftogaz.

First and foremost, it was essential to liquidate our untenable dependence on gas supplies from Russia. To make this happen we – Naftogaz, Ukrainian government, activists, our international partners and gas consumers – had to make a common cause.

First and foremost, it was essential to liquidate our untenable dependence on gas supplies from Russia. To make this happen we – Naftogaz, Ukrainian government, activists, our international partners and gas consumers – had to make a common cause.

It would be disingenuous of me to say that I accepted Kobolyev's offer only because I had the experience and competence to address some of the problems Naftogaz was facing. I saw this as an opportunity to demonstrate what a modern national company could contribute to the development of efficient markets and how it could play a vital role in the cause of state-building.

This was not a matter of personal ambition, but of wanting to see changes. I knew we could do better, and I wanted to be a part of it. Some might say I was interfering in things which were none of my business, but it was and remains my sincere belief that these changes were critically important. In fact, I sometimes regret not pushing harder on certain issues.

I focused on what I regarded as the most important matters within the confines of the possible. These confines depended on circumstances both external and internal to the company. I have already outlined the external factors above.

Internal hurdles were quite substantial, too. The government, under both Arseniy Yatseniuk and Volodymyr Groysman, refused to appoint me to the executive board (the company's top executive body) – even though my candidacy was submitted by the independent supervisory board appointed by the cabinet of ministers.

Any influence I might have had on decision-making was therefore indirect. Besides, I can’t help mentioning problems with the management system at Naftogaz, especially given that I often had a different understanding of how to manage a modern company – based on my experience of studying and working abroad. All this implied focusing attention on specific areas of business operations which would allow tangible results to be achieved for Naftogaz and Ukraine, while working at the same time to effect systemic change in the company and the industry as a whole.

It is not my intention to come across as complaining or defensive. Rather, I want to make it clear that any successes achieved were the result of overcoming some serious hurdles.

*The feature series "Naftogaz Against Gazprom" is running in partnership with Yuriy Vitrenko, executive director of Naftogaz Group. Opinions expressed in these features do not necessarily reflect the views of Naftogaz Group or the NV editorial team.